On the Saturday afternoon of Sing!’s weekend away at the Chellington Centre in Bedford, 2 groups of intrepid walkers were formed and went their separate ways. Read Jane Bramwell’s thoughts below on her experience on the longer of the 2 walks. 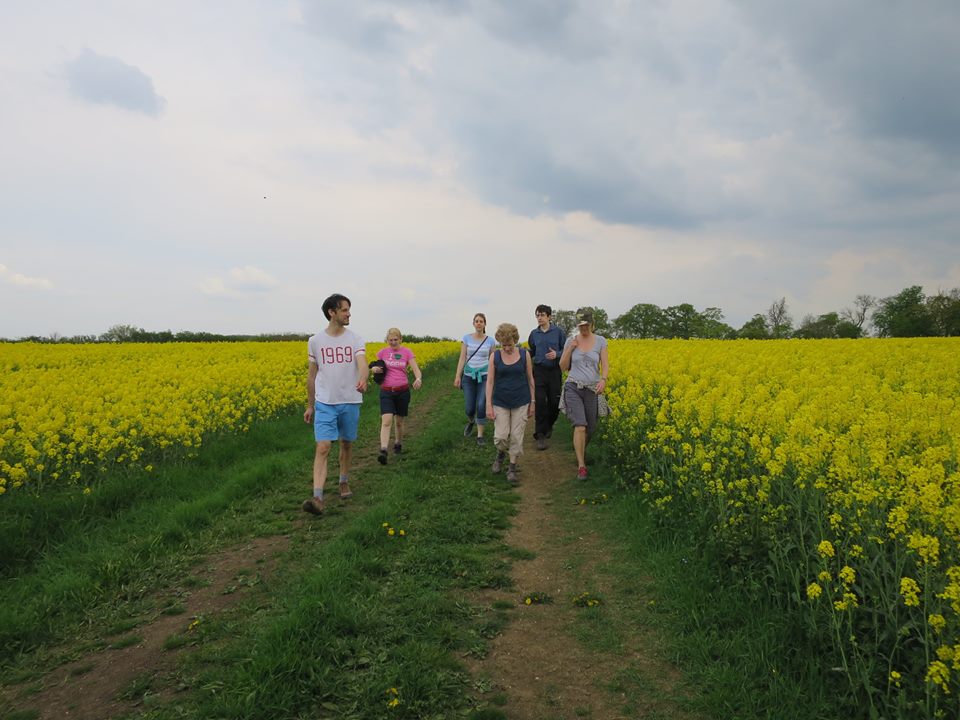 And so the dozen or so walkers set off after their respective workshops round 3.00.

Chris P (the member of Ramblers) and Sarah M (the one with the printer) had downloaded and printed off instructions for a circular walk in preparation. But where was it when it was needed? Rumour has it that it was in Jane’s bag. Hmm. At the last minute Jane had packed a 1:25,000 OS map of the area which she did have with her. Sarah M had the 1:50,000 map. We wouldn’t get lost.

We set off down the footpath and turned left onto Felmersham Road then turned right onto another footpath, which took us through a field with some horses, and then alongside Monk’s Wood – and through the trees was an amazing carpet of bluebells, in parts almost looking like it was suspended above the woodland floor.

We then walked along the contours and had a view of super yellow oil seed rape fields and Pavenham to the east. At a junction of footpaths, the band of walkers came to an abrupt halt…. Which way to go? Maps came out and various people tried to ascertain our location. With characteristic enthusiasm, Michael pronounced our location with an unusual grid reference – he’d got the northings and eastings the wrong way round…but he was a quick learner! It was agreed that we would turn left and skirt round Green’s Spinney and head back down slope to Felmersham Road, only further north east than previously.

All enjoyed the opportunity to walk and talk about themselves and each other, getting to know people a bit better. The humidity had been increasing all afternoon and there were some menacingly dark grey clouds to the south west, where it was definitely raining. Should we walk back along the road to the Centre? “No!”, said Bekki. “Let’s continue on to the river to complete the circuit”, or words to that effect. So we walked across the floodplain to the picturesque weir and hovered outside the pub… longingly for some people? Or just to make sure we were all together?

It was lovely to walk along the Ouse Valley Way through the Country Park alongside the lake, with great views of the Centre up on the river bluff.  Even better for some was the ice cream van outside the Visitors Centre, where a few couldn’t resist temptation – and why not, as in the end we had walked for two hours. We turned left and crossed the beautiful 14th century Harrold Bridge – with six arches spanning the River Great Ouse, and took the last bit of footpath back up to the Centre.